The Adventures of Basil and Moebius

The Adventures of Basil and Moebius

Alaric Moebius and Basil Fox are two lovable scoundrels looking to make a quick fortune.  Basil is a former SAS trooper turned Queen’s Guard by day and thief by night.  Moebius is an Oxford-educated charmer with a knack for getting into trouble.  Together they chase adventure under the patronage of “The Collector,” a mysterious billionaire with a taste for rare and valuable supernatural objects of the occult. 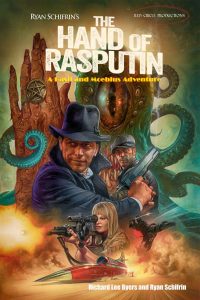 A new epic adventure awaits Moebius the gentleman thief and his associate Basil, Queen’s Guard by day and criminal by night. This time the Collector has his sights set on the Hand of Rasputin, which purportedly has supernatural powers. Basil and Moebius will have to liberate it from its current owner, a Russian crime boss with his own private army. But the duo has plans of their own, might they be able to use the Hand to gain their freedom once and for all?

A Lovecraftian pulp take on the heist genre, with a classic bruiser-and-rogue team who face supernatural threats with a combination of gallows humor and sheer bloody-mindedness.

Now available on exclusively on Kindle and in Print-on-demand Paperback:

THE TALES OF BASIL & MOEBIUS!

Created by writer/director RYAN SCHIFRIN and co-written by the legendary LARRY HAMA (G.I.Joe, Wolverine), this quadrilogy of original hardcover graphic novels will follow the adventurous duo around the world through one mind-bending episode after another, all in the pursuit of fringe science and urban legend for their supernaturally-insistent employer, The Collector!

VOLUME ONE contains three complete graphic novellas:  “The Curse of Spring-heel Jack,” “The Bloodstone Caper,” and “The Devil’s Handshake” chronicling the early adventures in their career together, introducing the unlikely duo for the first time in a highstakes chain of pulpy high adventures created by Ryan Schifrin and co-written by the legendary Larry Hama (G.I. Joe, Wolverine)!  Cover by Dave Dorman!  160 pages, $19.99

VOLUME TWO contains the feature length adventure “The Shadow Gambit” in which our pair of scoundrels find themselves dodging ninjas, pirates, and Nazi war robots all in pursuit of mysterious, fabled UFO technology reportedly developed during WWII!  Cover by Greg Staples!  120 pages, $18.99

VOLUME THREE contains the revealing tale “The Secret of the Ancients,” in which our unlikely duo discover the origins of The Collector, and see for the first time just how massive the scale of danger is facing the world they’ve unwittingly entered!  Cover by Glenn Fabry!  120 pages, $18.99

VOLUME FOUR reveals “The Fate of All Fools”, as our adventurous duo face off against the ultimate threat — not only to our world, but time and reality as we know it!  This final chapter is written by Ryan Schifrin and Richard Lee Byers (Forgotten Realms)!  Cover by Ken Kelly!  120 pages, $18.99 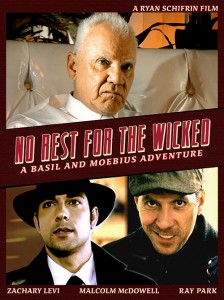 NO REST FOR THE WICKED

AND DON’T FORGET THE DIGITAL SINGLE ISSUES AVAILABLE ON COMIXOLOGY!

SECRET OF THE ANCIENTS

THE FATE OF ALL FOOLS

Now available on exclusively on Kindle and in Print-on-demand Paperback:

THE HAND OF RASPUTIN

THE TALES OF BASIL & MOEBIUS 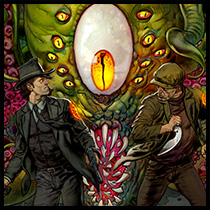 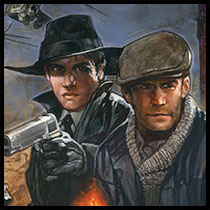 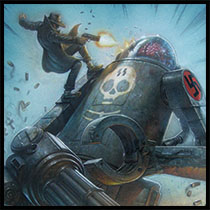 “When I first heard about the concept for the heroes in Devil’s Handshake, I thought it was going to be very cool.  It is.  In the best tradition of the buddy comedy, Devil’s Handshake combines derring-do and witty repartee to create a team that the reader wants to join.  Think Artemus Gordon and James West, or Fritz Lieber’s Fafhrd and Gray Mouser.  Now tweak the setting and have a blast.” 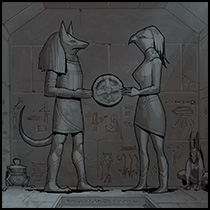 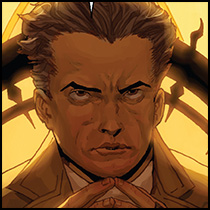 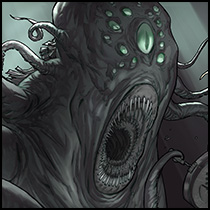 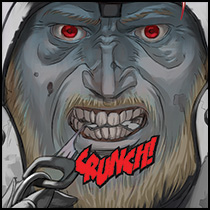 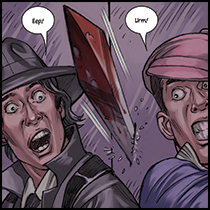 Trailer "No Rest for the Wicked"

Basil Fox and Alaric Moebius are a unique pair of scoundrels in a time-tested tradition of scoundrel adventurers – one a working class cockney Brit, the other an Oxford educated thrillseeker.  How did they come about?  What inspired their creation?

Ryan Schifrin:  After I finished ABOMINABLE, I was thinking about horror movies and how most of the iconic characters are the villains, not the heroes.  With some notable exceptions such as Ripley, Ash etc.  But generally the villains are ones we remember.  I thought about what iconic heroes are my favorites, and Han Solo and Jack Sparrow sure seem a lot more fun than Luke Skywalker or Will Turner.  The goody-two-shoes heroes are just not as badass as the rogues.  So my hope was to come up with some fun anti-heroes that you could drop into any genre (horror, action adventure) and see what they decide to do in those situations.  At the same time, I was at UCLA watching a doubles tennis match and these two European guys were winning and I started imagining what do they do when they’re not playing.  The idea of these two guys getting drunk in pubs and getting into all sorts of trouble and adventures just popped into my head and Basil & Moebius were born.

You come from a film-making family background — your father is famed composer Lalo Schifrin — and you studied film at USC, directing numerous short films and the feature-length Abominable, for which ABC’s Nightline dubbed you “the Future of Horror.”  What led you to explore comics and graphic novels as a storytelling medium?

Ryan Schifrin:  I’ve always loved comics, I grew up reading Spider-Man, G.I. JOE and tons of others.  Storytelling is storytelling, it doesn’t really matter what the medium is.  Graphic novels are a lot like films – the only huge difference is characters in a graphic novel can’t surprise you with their performances – but creatively I find them just as fulfilling.  The big advantage to doing graphic novels is financial – there is a scope to the stories I can tell in that medium that I just can’t afford to do in film (at the moment).  It’s just as cheap to draw two people talking as it is to draw a blimp crashing into a volcano.  And in the process of making graphic novels, I find its much easier to get producers and financiers interested in making a live-action version of the story than if they’d just read a screenplay.

Basil and Moebius are chips on the figurative poker table of a mysterious benefactor known only as “The Collector,” who (minor spoiler) is not of this reality.  What inspired this character?  And are his intentions good, evil, or a question to be answered later in the series?

Ryan Schifrin:  The Collector was inspired by my own obsession with collecting.  It’s a mentality I can certainly understand, and I thought about how interesting it would be to have someone who is thousands of years old.  What would he be collecting?  As for his intentions, originally I didn’t want to answer the question for myself because my own fascination with him came from not knowing the answers.  As the series went on, I realized I had to come up with the end game so that I could know whether it was okay to do certain things (like kill off a character) and also to provide a reason why he is collecting these things.  It turns out that he does have a master plan.  It’s best to read the series and find out as the stories unfold, I don’t want to spoil anything.

Ryan Schifrin:  I’ve been such a fan of their work.  I grew up reading all of Larry’s G.I. JOE comics, and I remember when Heir to the Empire came out after such a drought of Star Wars stuff and Tim’s book just hit all the right notes.  The process is basically to approach them respectfully, explain the series and the characters, and invite them to come play in the world.  They have total creative freedom to do whatever they want – within certain parameters (my job is to define what those are).  The important thing is to make sure that Basil & Moebius stay ‘in character’, regardless of who is writing about them.

Ryan Schifrin:  God willing, yes.  I would love to see this become either a series of films or a TV show.  Every time we screen “No Rest” at a festival, the biggest compliment we get is people coming up and saying they’d love to see it become a series.

This is the first of four volumes planned for release this year – what sort of adventures can readers look forward to in the months ahead?  And do you have more adventures planned beyond those already produced?

Ryan Schifrin:  Volume one has the introductory adventure “The Curse of Spring-Heel Jack” where we get to see how  Basil and Moebius first met.  It also contains “Bloodstone” which I intended to be the next feature film I did after ABOMINABLE.  It’s basically a haunted castle adventure.  And the volume is rounded out by “The Devil’s Handshake” which is more of an Indiana Jones style adventure.

Volume two is one giant globe-trotting James Bond style adventure called “The Shadow Gambit”.  If it was a live action movie it would be the big summer tentpole one.  Volume three is called “The Secret of the Ancients”, which is another giant adventure with Lovecraftian overtones and finally starts answering some of the big questions.  Volume Four is tentatively titled “Odyssey”.  It’s not an end to the series (although it does provide some finality) but it’s a good place to take a pause.  I already have ideas about where the series would go after that, but I intentionally wanted to let this story arc of Vol 1-4 play out to its natural conclusion.

Fritz Leiber wrote his Fafhrd and Mouser series over the span of his entire life, and I very much like the idea of characters that you can keep coming back to.  The notion that twenty years from now, if I get a cool idea for a Basil & Moebius adventure, I can jump into it – even if it’s a short story – is incredibly appealing.  I’ve had such a blast writing these characters… why stop?