Presenting a seven-volume library of works by master illustrator Sergio Toppi. The self-taught artist is widely considered one of the world’s greatest visionaries in the art of sequential storytelling, with his evocative, detail-oriented pen-and-ink style tearing down the boundaries of what before him was considered or accepted to be “comics.” His work has influenced generations of contemporary masters who sing his praises, including Frank Miller, Walt Simonson, Bill Sienkiewicz, Denys Cowan, Ashley Wood, and many, many more. 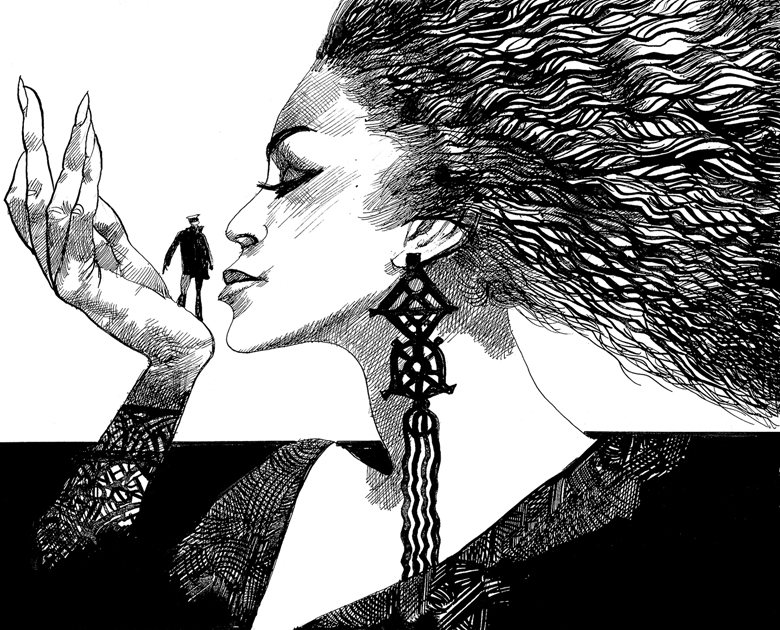 Written and illustrated by: Sergio Toppi

I hope readers of this book — potential artists included — will be as entertained and inspired by Toppi’s masterful work as it deserves. And if you’re also a tad intimidated, join the club.

You get the sense that Toppi is challenging himself in every endeavor.  And it makes you want to challenge yourself after experiencing his work.

There are so many lines here to enjoy and learn from, a teacher by example, the best kind.
Volumes in the series
Volume 6: JAPAN now available!

Volume One: The Enchanted World

Volume Four: The Cradle of Life

Sergio Toppi was born in Milan, Italy, on October 11, 1932. As a self-taught artist, he began his career as an illustration working for the renowned Italian publisher UTET on numerous notable advertising campaigns. Adapting his style to fit the needs of each commission, he excelled at capturing documentary accuracy as well as caricatural cartooning. His first sequential work was featured in Il Corriere dei Piccoli (“The Children’s Gazette”), featuring the character Il Mago Zurli (“The Zurli Wizard”). In the decades that followed, his subsequent work evolved in artistry, garnering numerous accolades throughout the European industry. He primarily focused on short, self-contained stories for various French and Italian publications, including the experimental monthly Alter Alter, the adventure magazine Orient Express, and well-known comics magazines such as Linus, Corto Maltese, and Un uomo un’avventura in Italy and l’Histoire de France en bandes dessinées and La Découverte du Monde published by Larrousse in France. Collected exclusively in Europe by the French publisher Editions Mosquito, his body of work has been recognized as a masterful example of illustration and sequential storytelling that has influenced many of the biggest names in the industry worldwide. His art has been displayed in the “Masters of the European Comic Book” exhibit at the Bibliothèque Nationale in Paris and in the Museum of Comic Art in Angoulême.