Now that we’re somewhat settled into new digs, we’re gearing up for OUR FIRST BIG CONVENTION OF THE YEAR — C2E2, right here in hometown Chicago next weekend, April 24th-26th at McCormick Place!  We’ll be showing and selling our full library of awesome books at booth #742 (which I understand is facing the LIVE Stage, where all sorts of awesome guests and events will be livestreamed all weekend long)!  We will have copies of all of our best sellers, including our newest releases: Tom DeLonge’s POET ANDERSON #1, Matteo De Longis’s VOX, LOVE: THE TIGER, Evertold’s DAOMU, and Ryan Schifrin’s THE ADVENTURES OF BASIL AND MOEBIUS vol.1!

But that’s not all — we’re also hosting our FIRST EVER PUBLIC PANEL at 11:15am, Friday 24th, in room S204!  We’re excited to open the show with a peek at our latest and upcoming titles, with Wasted Lands artist/creator Dave Dorman and author Austin Wilson to discuss his upcoming graphic novel RE-PRO-DUCT.  Plus, we will also feature free screenings of both the award-winning POET ANDERSON animated short film and the live action BASIL AND MOEBIUS short, “NO REST FOR THE WICKED“, starring Zachary Levi (“Chuck“), Ray Park (“Star Wars”, “GI Joe“), and Malcolm McDowell (“A Clockwork Orange“)!!! 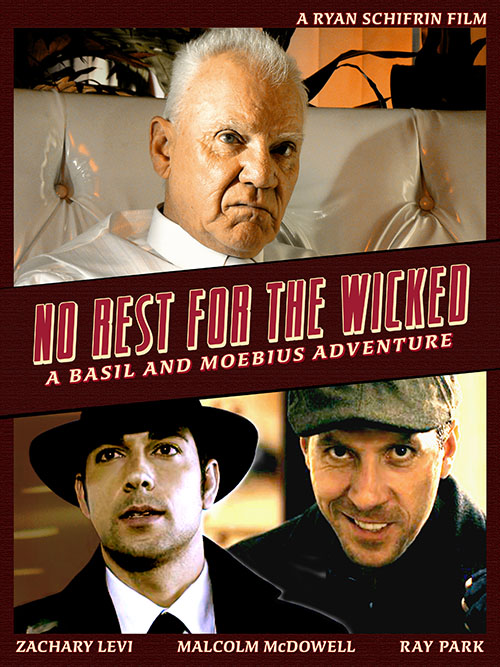 I know, right?  That’s some wicked star-power!
This awesome short film has made the festival circuits, racking up awards left and right, and we are proud to not only show it during our panel, but hosting it for it’s WORLD PREMIERE ONLINE!  That’s right, if you’re unable to make it to the show, visit www.magnetic-press.com/BasilandMoebius on Friday April 24th for the world premiere!  It’s an action-packed 16 minutes filled with thieving scoundrels, zombie hitmen, and a kung-fu monkey (played by Crystal the Monkey, you know, from “The Hangover”…?)  It is a blast guaranteed to please!
Share this post
Subscribe
Login
0 Comments
Inline Feedbacks
View all comments

SHERLOCK HOLMES, A STUDY IN SCARLET launches on …

The weekend is over and BLACK FRIDAY transforms …

A fresh new illustrated edition of the very first …

Our biggest sale of the year is still going! …

Make your favorite passion a family activity with …

Happy Thanksgiving from Magnetic Press! What are …

Get ready for SHERLOCK HOLMES, A STUDY IN SCARLET!…

Did you know only 6 minutes of reading can reduce …