Booklist calls KLAW “Top-notch… Exceptionally strong.” To celebrate their successful state-side launch of their beloved series, we sat down with series creators ANTOINE OZANAM and JOE JURION to speak with them about their collaboration, creative process, past and future projects, and of course, all things KLAW!

Co-created by artist Jurion and writer Ozanam, KLAW tells the tale of young Angel Tomassini, a typical high school kid with typical high school troubles – girls, tests, bullies, etc. But he soon realizes he’s secretly plagued by a few atypical problems as well. First he finds out his dad is a major mafia Don. Then he is told that there is a rampant slasher-killer on the loose. And ultimately he learns that he’s actually the latest in a line of ancient were-beasts who have been at war for thousands of years. Needless to say, this isn’t your average high school drama.

A boy. A girl. The mafia. And a secret society of were-animals in the throes of an ancient civil war.
KLAW may not fit any standard genre description, but it is a thrilling new series that resonates in several categories at once: Teen Angst Coming of Age tale, Supernatural Crime thriller, Martial Arts epic, and just a hint of High-tech Superhero jeopardy. Having already made big waves with it’s original release in Europe, the first three-part cycle of this sprawling series just took the US by storm.

//KLAW is an exciting hybrid of many different genres – High School drama, supernatural monsters, crime, martial arts, anime, and even a bit of super-hero elements in the third chapter. When they all come together, they make beautiful, unique creation. What was your primary influence and inspiration when designing the look of this series?
JOEL: For visual influence, I worked alone on a project where I experimented with some anthropomorphic character designs. But I couldn’t build an interesting story from it, so I asked Antoine if he would have a story idea in this style.

//How did you two come together on this project? Did you know each other previously, or was this project your first introduction?
OZANAM: I met Joel through a mutual friend. When we ate together for the first time, he showed me his sketchbooks, and I fell under its charm. I waited several years wanting to work together. I wanted to start that first night! When he offered this idea to work together, I reworked an old project of mine that was the first version of Klaw. Since then, it has been going very fast. 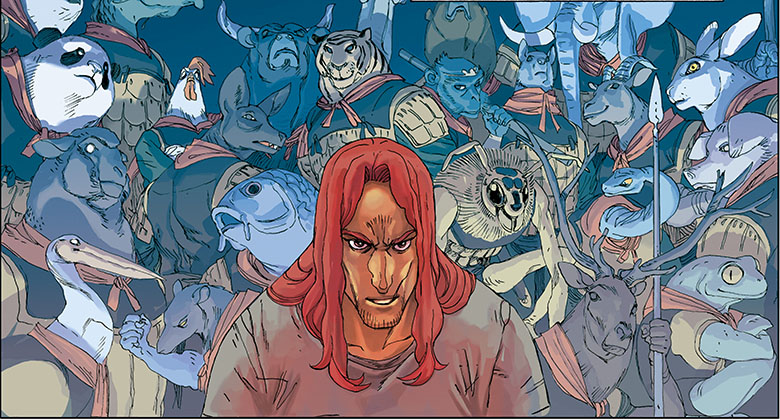 //KLAW is a unique mix of many different things – crime, supernatural, martial arts, and Young Adult drama. What was the inspiration for the story concept, and how did that turn into such an exciting blend of genres?
OZANAM: Well, that’s just it! The mixture allows freedom! In fact, it was seeing “Running on Karma” that showed it was possible. I wanted to tell a story for my son with a teenager who has powers, but I wanted it to continue to please him when he was growing up. It was necessary to mix things that would be of interest to him and the things that interested me, too.

//Joel, you do a lot of work within the animation and video game industries, creating concept art, character designs, and quite a lot of storyboards. What other animation and video games have you worked on?
JOEL: I worked on a few movies like (the 3D CG animated feature) PRODIGIES (by director Antoine Charreyron), THE LITTLE PRINCE (starring the voices of Jeff Bridges, Paul Rudd, James Franco, and Benicio del Toro, coming soon to Netflix), and (the animated evolutionary caveman comedy) WHY I DID NOT EAT MY FATHER. For video games I was involved in developing a game called Battlecry and a few others I can’t say the name yet.
//How do these experiences in Animation and Video Game design translate to creating a comic book? What is the biggest difference between storyboards and a good comic page?
JOEL: I learn by watching what others do. This is a place full of talented people at work. We take pride in each other and have fun. The other thing that made me move was that I had to draw in styles or universes that were not mine, I had to question myself and move out of my comfort zone. In the end it allowed me to expand my own universe. 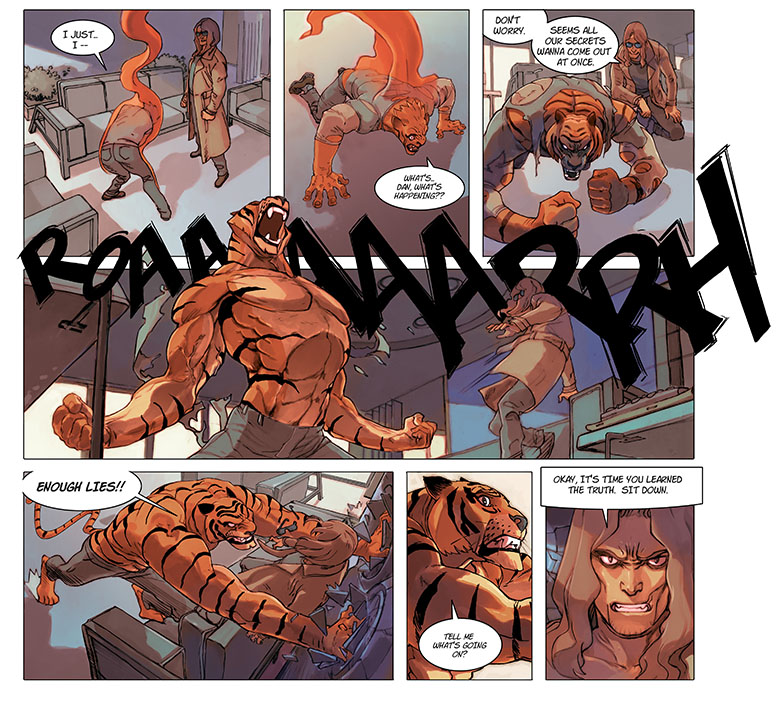 //Antoine, you’ve written and created well over 30 different comic series and stories in your career so far. Many of them tend to fall into the “crime” genre – would you say that is your favorite genre to explore?
OZANAM: In fact, I’ve written more than 50 books! (But some under another name.) About half of them are in the “crime” genre, but that may be more in background ambiance and not the main subject. I like what “crime” says about our society. It creates tension between the characters. But, in fact, I think I prefer the fantasy genre, that lets you tell things outside our daily lives…

//What other genres do you enjoy writing?
OZANAM: I just like writing stories. Every kind! Currently, I am writing a lot of westerns and I feel very fortunate. I recently discovered that writing true stories is also very interesting. For one can imagine many things in a true story. It seems, however, that what I like is to mix genres. Start in the same book by a superhero story that turns into a thriller and then end as a love story… 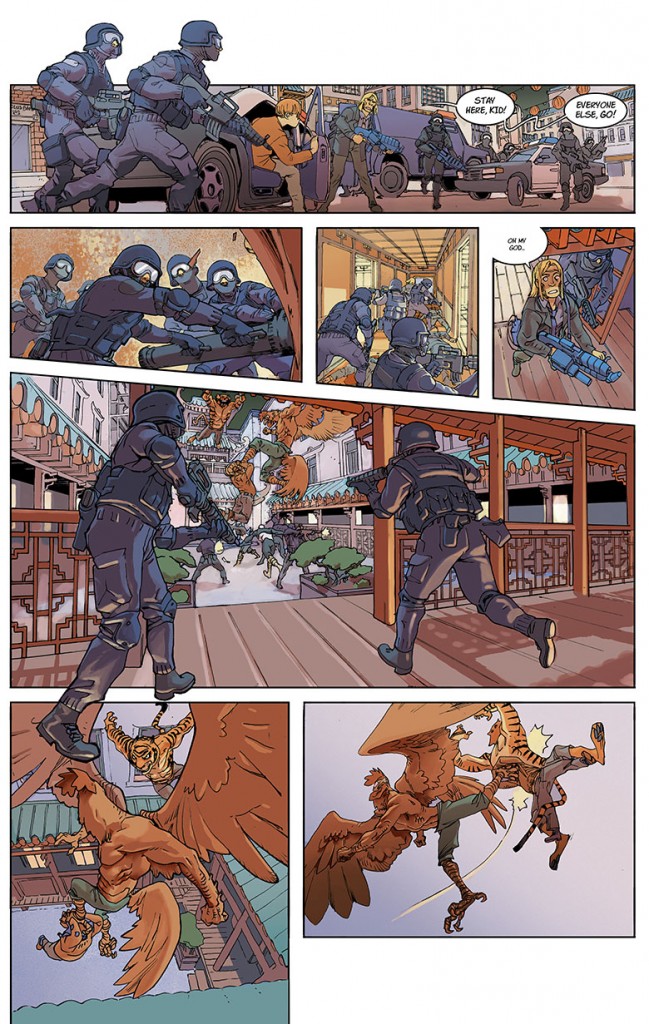 //Joel, explain your preferred technique – do you work traditionally, with paper, pencil, and ink, or digitally with a tablet?
JOEL: A little bit of everything. And when I say everything it is mixed in my drawing, I mean, one moment I’ll work on the computer and the other by hand, in a traditional way. But right now I would like to return to the traditional art, but I know that tomorrow it will be different.
//You are well known online for your “girl art” – cute girl depictions of fan favorite characters. A lot of these are popular American characters – would you like to work on some US comic properties some day? If so, what would you like to draw?
JOEL: I am a big fan of comics, such as manga and Franco Belgian comics. I am a child of John Byrne and a fan of Adam Hughes. Yes, I would like to make comics even if I always told myself that as even if I couldn’t draw a beautiful Superman I would not be able to master the comics! 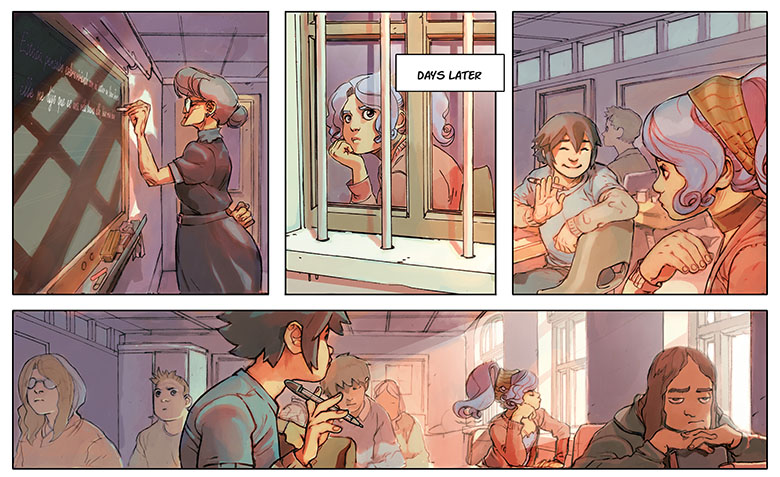 //This first book of KLAW contains the first 3 chapters of the story (“The First Cycle”), with chapters 4-6 comprising “The Second Cycle”. Do you have plans for more?
OZANAM: I’m writing Cycle 3 now (chapters 7-9). If my French publisher wants, I would keep the series going for a long time. Now that I know Angel (The Klaw), we’re friends. And I’m very loyal to my friends.
JOEL: I’m currently finishing chapter 6 of Klaw now, which would finished the second cycle. Lombard (the French publisher) is starting to not only continue but intensify the publication of the series. For this goal we are testing a production method more as a team, closer to what you do in the United States, even though we have lost this process in France. Besides that, I have several more or less personal projects advancing, but it means that means I will have to abandon work in film or video games to concentrate on the medium that is the most important to me.

For more info, including a video trailer & preview pages check out the KLAW webpage!

Calling all artists and aesthetes! We want to know…

Last call to join the CONVOY (and grab Mezkal …

Rev your engine! The the most shocking ride of …

Oh man, looking over these shelves here and… is …

Mezkal and Convoy are still live on #kickstarter! …